I have been trying my hand on building hills recently. The one shown in this post is second one and turned out well enough in my opinion. There are couple things I will do differently in the future, but the basic method works.

I used card board from müsli box, as it’s readily available and cheap. Disadvantage is that it’s rather flimsy and tends to warp.

I started measuring and cutting a base for the hill. Then I sketched profile for the hill along the ridge line and cut it from card board. Using the ridge line as template, I sketched six more profile (three for each side), each being lower than the previous one. This defined overall shape of the hill. I wanted sort of two hills standing together, instead of usual single mound. It’s worth keeping the profile smaller than the base, as having some extra space to work with is good. Especially if you’re using thin cardboard that tends to warp and needs to bent to shape later.

These seven profile cuts were adjoined together with several other ones that were running perpendicular to them and slotted together. I found it easier to plan how the frame would fit together by first drawing it on the base. This allowed me to cut them to size and have slots match each other. 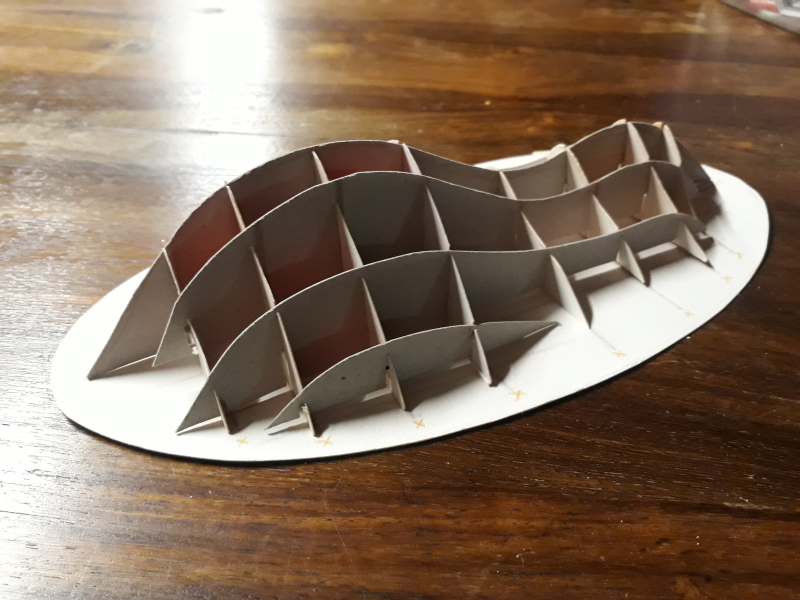 All pieces were glued together with general wood glue, strips of paper and left overnight to dry.

After everything was dry, I mixed some wall paper glue and started plastering strips of news paper on the frame. Having a smooth surface isn’t super important at this point, it’s more important to get the frame coated and joined with the base. Having some space between the frame and edge of the base helps here. Avoid getting news paper and glue under the base. While it makes joining the base and frame easier, it will make the base not lay smoothly on the battle field and you’ll have to figure out how to fix this (I did this mistake with the first hill and ended up glueing the result on a bigger base).

I had to use quite a bit of news paper to get the frame covered and some of the supports were still visible in the end. It might make sense to use card board and glue smaller supports between frame before this step. I’m going to try that with the next hill.

Again, after this step was finished, the hill was left to dry overnight (it was rather wet from all the glue).

Next day my hill didn’t sit flat on the table anymore and I had to use considerable amount of force to bend the edge back in shape. In some parts this separated the hill and the base from each other, resulting nasty looking seams. I fixed with some masking tape. Again having a smooth surface isn’t important here, but having good structure is. Glued news paper probably doesn’t soak that much liquid anymore, but I wanted to be sure and coated the hill with acrylic gesso. After it dried it was time to coat the hill.

I like spraying my terrain pieces with some brown spray paint. If I miss a spot later while basing, I can always claim that the brown is just earth showing through. Actual basing wasn’t too complex. Layer of brown spray, glue some sand in splashes here and there and then green flock for rest of the hill. I’m using Army Painter basing materials, but others will work too (or you can make your own). Thinning glue with water makes it easier to spread with brush, but too thin mixture will be runny and there will be thin spots here and there. Again, hill was left to dry overnight and next day I hit it with liberal coat of spray on varnish. Without the varnish, flock and sand will slowly rub off during games and make a mess everywhere.

The end result is pretty decent. I was thinking that in the future I might want to pick a real hill and try to replicate its shape on the table top.